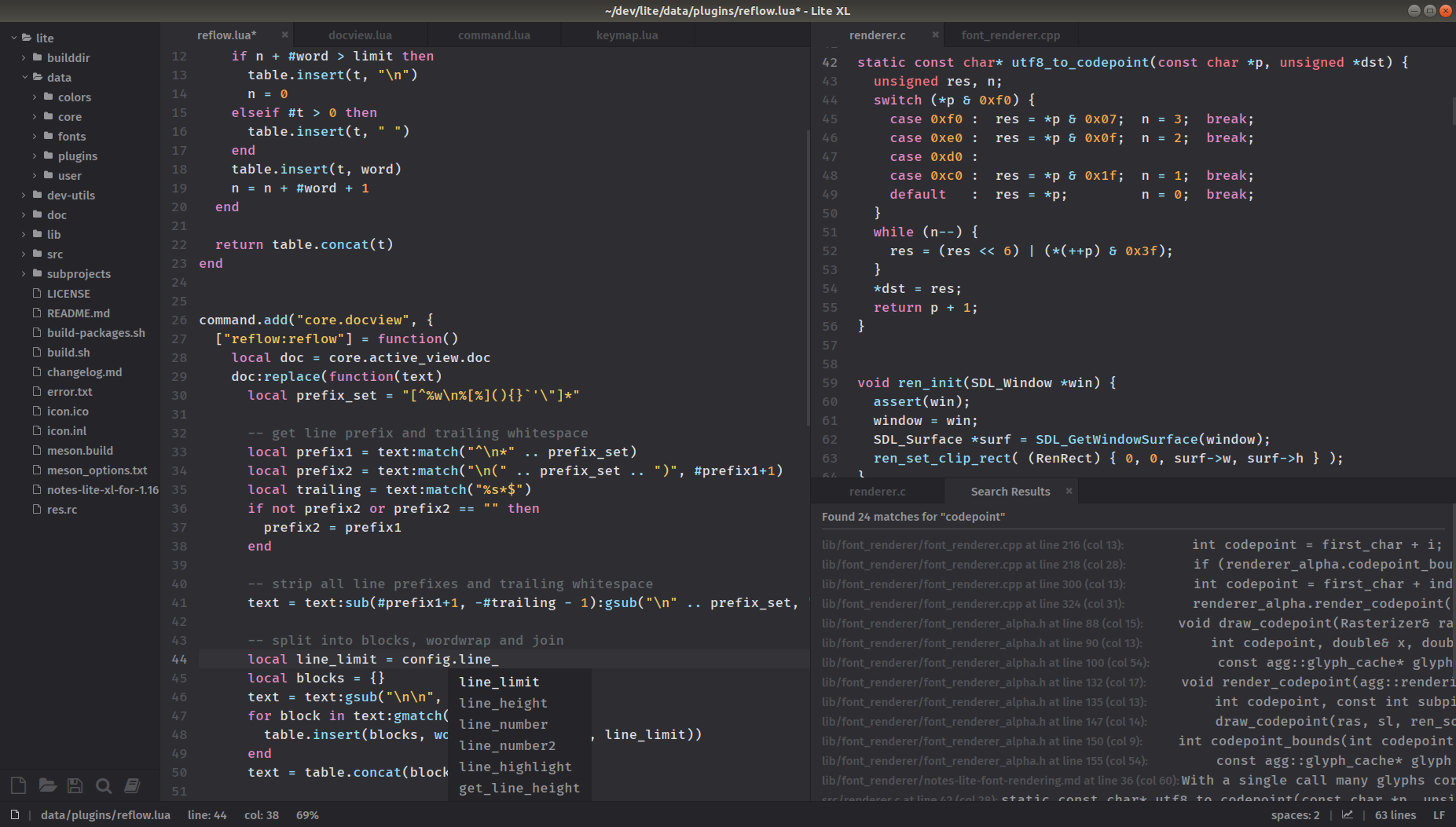 A lightweight text editor written in Lua, adapted from lite

Lite XL has support for high DPI display on Windows and Linux and, since 1.16.7 release, it supports retina displays on Mac OS.

Please note that Lite XL is compatible with lite for most plugins and all color themes. We provide a separate lite-plugins repository for Lite XL, because in some cases some adaptations may be needed to make them work better with Lite XL. The repository with modified plugins is http://github.com/franko/lite-plugins.

The changes and differences between Lite XL and rxi/lite are listed in the changelog.

Lite XL is derived from lite. It is a lightweight text editor written mostly in Lua — it aims to provide something practical, pretty, small and fast easy to modify and extend, or to use without doing either.

The aim of Lite XL compared to lite is to be more user friendly, improve the quality of font rendering, and reduce CPU usage.

Additional color themes can be found in the colors repository. These color themes are bundled with all releases of Lite XL by default.

The editor can be customized by making changes to the user module.

You can build Lite XL yourself using Meson.

In addition, the build-packages.sh script can be used to compile Lite XL and create an OS-specific package for Linux, Windows or Mac OS.

The following libraries are required:

The following libraries are optional:

On Debian-based systems the required libraries and Meson can be installed using the following commands:

To build Lite XL with Meson the commands below can be used:

If you are using a version of Meson below 0.54 you need to use diffent commands to compile and install:

When performing the meson setup command you may enable the -Dportable=true option to specify whether files should be installed as in a portable application.

The user directory does not depend on the portable option and will always be $HOME/.config/lite-xl. $HOME is determined from the corresponding environment variable. As a special case on Windows the variable $USERPROFILE will be used instead.

If you compile Lite XL yourself, it is recommended to use the script build-packages.sh:

The script will run Meson and create a zip file with the application or, for linux, a tar compressed archive. Lite XL can be easily installed by unpacking the archive in any directory of your choice.

Please note that there aren't any hard-coded directories in the executable, so that the package can be extracted and used in any directory.

Mac OS X is fully supported and a notarized app disk image is provided in the release page. In addition the application can be compiled using the generic instructions given above.

Any additional functionality that can be added through a plugin should be done as a plugin, after which a pull request to the plugins repository can be made.

If the plugin uses any Lite XL-specific functionality, please open a pull request to the Lite XL plugins repository.

Pull requests to improve or modify the editor itself are welcome.

This project is free software; you can redistribute it and/or modify it under the terms of the MIT license. See LICENSE for details.