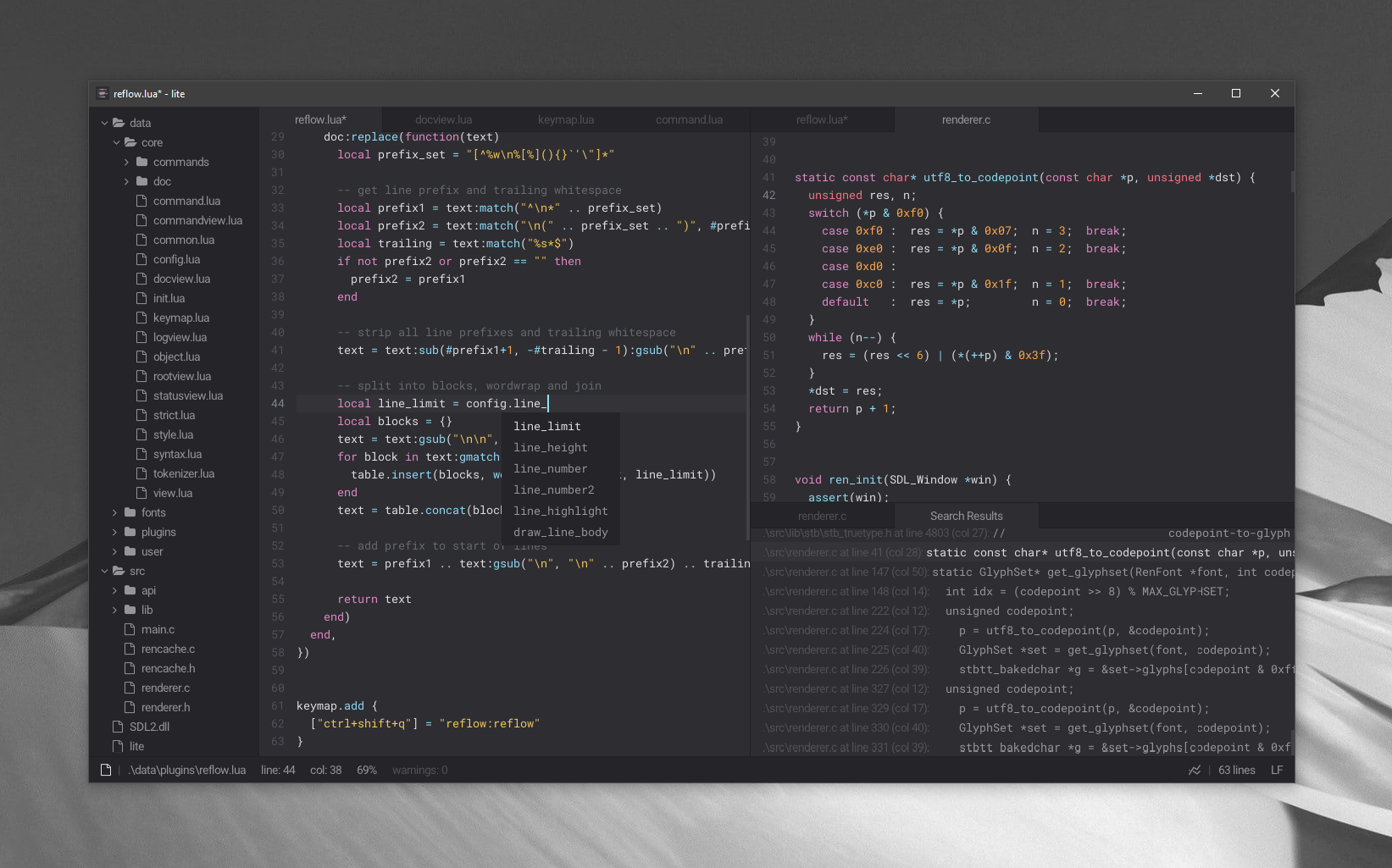 Lite is a lightweight text editor written mostly in Lua — it aims to provide something practical, pretty, small and fast, implemented as simply as possible; easy to modify and extend, or to use without doing either.

Lite XL is based on the Lite editor itself and provide some enhancements while remaining generally compatible with Lite.

Lite works using a project directory — this is the directory where your project's code and other data resides.

The main way of opening files in lite is through the core:find-file command — this provides a fuzzy finder over all of the project's files and can be opened using the ctrl+p shortcut by default.

lite can be configured through use of the user module. The user module can be used for changing options in the config module, adding additional key bindings, loading custom color themes, modifying the style or changing any other part of lite to your personal preference.

The user module is loaded by lite when the application starts, after the plugins have been loaded.

The user module can be modified by running the core:open-user-module command or otherwise directly opening the $HOME/.config/lite-xl/init.lua file.

On Windows, the variable $USERPROFILE will be used instead of $HOME.

Please note that Lite XL differs from the standard Lite editor for the location of the user's module.

The project module is loaded by lite when the application starts, after both the plugins and user module have been loaded.

The project module can be edited by running the core:open-project-module command — if the module does not exist for the current project when the command is run it will be created.

Often projects contain compiled, bundled or downloaded files which you don't want to edit. These files can be excluded from projects by configuring config.ignore_files. Such a configuration might look like config.ignore_files = { "^%.", "node_modules" }. This will exclude the node_modules folder and any file starting with .. You can add this to a user or project module.

If a project has more files than the maximum (configured with config.max_project_files) lite-xl will switch to a different mode where files are lazily loaded.

Note: Because of lazy loading core:find-file will open core:open-file instead.

Add directories to a project

The additional directories can be removed using the command core:remove-directory.

When you will open again Lite XL on the same project folder the application will remember your workspace including the additonal project directories.

Since version 1.15 Lite XL does not need a workspace plugin as it is now bundled with the editor.

Using the command files:create-directory or control-click in a directory in the tree-view to create a new empty subdirectory.

Commands in lite are used both through the command finder (ctrl+shift+p) and by lite's keyboard shortcut system. Commands consist of 3 components:

Commands can be added using the command.add function provided by the core.command module:

Commands can be performed programatically (eg. from another command or by your user module) by calling the command.perform function after requiring the command module:

All keyboard shortcuts in lite are handled by the core.keymap module. A key binding in lite maps a "stroke" (eg. ctrl+q) to one or more commands (eg. core:quit). When the shortcut is pressed lite will iterate each command assigned to that key and run the predicate function for that command — if the predicate passes it stops iterating and runs the command.

An example of where this used is the default binding of the tab key:

A new mapping can be added by your user module as follows:

A list of default mappings can be viewed here.

Plugins in lite are normal lua modules and are treated as such — no complicated plugin manager is provided, and, once a plugin is loaded, it is never expected be to have to unload itself.

To uninstall a plugin the plugin file can be deleted — any plugin (including those included with lite's default installation) can be deleted to remove its functionality.

If you want to load a plugin only under a certain circumstance (for example, only on a given project) the plugin can be placed somewhere other than the plugins directory so that it is not automatically loaded. The plugin can then be loaded manually as needed by using the require function.

Plugins can be downloaded from the plugins repository.

If you modifies the user configuration file or some of the Lua implementation files you may restart the editor using the command core:restart. All the application will be restarting by keeping the window that is already in use.

Colors themes in lite are lua modules which overwrite the color fields of lite's core.style module. Pre-defined color methods are located in the colors folder in the data directory. Additional color themes can be installed in the user's directory in a folder named colors.

A color theme can be set by requiring it in your user module:

In the Lite editor the function require is used instead of core.reload_module. In Lite XL core.reload_module should be used to ensure that the color module is actually reloaded when saving the user's configuration file.

Color themes can be downloaded from the color themes repository. They are included with Lite XL release packages.